Urban Dictonary defines Steampunk as:
-Steam punk is a subgenre of fantasy and speculative fiction that came into prominence in the 1980s and early 1990s.  The term denotes works set in an era or world where steam power is still widely used.
-A type of subculture that mixes the clothing styles of past generations with modern conveniences, creating inventions that look as if they could have been created generations ago.  For instance, a gameboy would be powered by steam and contain clockwork parts rather than silicon and electrical wiring. Heart Watch     Robot
As of late I have been very intrigued with Steampunk jewelry and the style in general.  It is not my typical style, and a bit out of my comfort zone, but never the less, I think it is cool!! 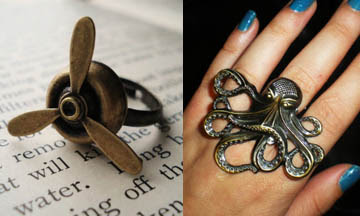 Spin      Octopus
Steampunk involves a setting where steam power is widely used- whether in an alternate history as Victorian era Britain or "Wild West" era United States.  "Wild West," what's not to love?!?
Steam punk comes in all sorts, but I have really been noticing jewelry a lot lately as I am in the process of opening my own Etsy, where I found all the items posted.  Even though I probably won't have steampunk stuff in my shop(never say never), maybe I can take some inspiration from some of these wonderful pieces! 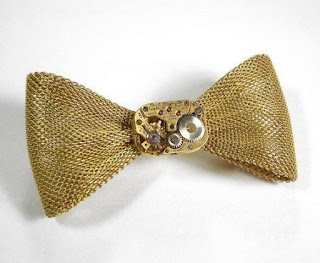 And last, but certainly not least, a bow.  If you know me well then you know I love a good bow, and the my friends is a "good bow!!"
Labels: Design World