That Time My House Was Surrounded by the Police

Last week I came home from work and collapsed on the couch because I was exhausted.  As my mom and I were in the living room talking about our day we hear my dad walk out of the bedroom and say that there is a police officer walking on the north side of our house. 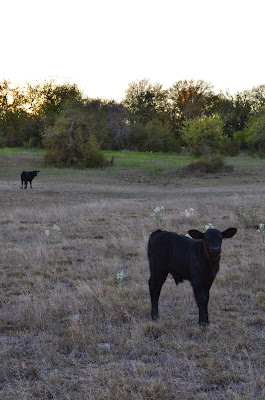 I reluctantly hoped up off the couch to see what was going on.  As I looked out the windows at the front of the house I realize that the road was blocked off in front of our house by three police cars.    As you all know I live on a ranch, so our house is off the road quite a bit and we don't see police officers out where we live very often so this was odd.  So to block off the road in front of our house and surround it with police cars is quite a feat.

As my dad and I went outside we discovered that the police officers were chasing two black calves that had run behind our house.  We assured them that they were not ours because we use white ear tags in the right ears and these two had yellow ear tags in the left ears.  --For you city folk, ear tags are the things you see hanging from cows ears that have numbers on them.  They are a way to keep track of not only how many cows you have, but also a way to identify yours without having to brand.--

Since we live in a small town and know our neighbors cows, we knew who these calves belonged to and said it would be okay to put them in our pasture until they were back in town to come get them. So all six of us(four police officers, dad and I) ran them into our pasture and then said our goodbyes to Sanger's Finest!  This was definitely one of those did that just happen moments?

No lie, this is my life!  See what you are missing city folks.  I do believe I have officially earned my rent for the month because we have been working cattle a lot already this month!  Not only that but a calf kicked me in the arm the other day too!
Labels: Ranch Life Small Town Life Texas Tuesday

Stephanie said…
Something similar happened to my father-in-law. He was keeping a friend's cow in the pasture and it got out causing a big fiasco with lots of chasing. Thankfully a few hours later all was okay.
Thanks for sharing and have a great week!
June 10, 2013 at 5:03 PM