As of this coming weekend it will officially be three years since I had one of the best weekends of my life and attended the Monaco Grand Prix.  Two days after graduating college I headed to Nice, France for a week long mission trip and extended my stay with my friend Christeen after the group went home to see the sights for another week and attend the grand prix.

Since those two weeks and my two trips to Nice the Monaco Grand Prix has had a special place in my heart.  I love to follow the Formula 1 circuit and have had fun looking through my photos from that memorable weekend, so I thought I would share them with you all along with my stories from that 'Bucket List Item' weekend.

While my team was still in Nice we took the train to Monaco one afternoon to walk around and see the preparations for the upcoming race.  I had been there the year before, but saw it in a totally different light then because I knew that the next time I got off the train it would be for the Saturday practice sessions for THE Grand Prix!

Above are a few pictures from that day walking around with my mission team and let me just tell you we walked and walked that day!  We knew our way around pretty well from being there the year before and well because Monaco is tiny, but there were barricades and grand stands every where so we had quite the challenge getting around.

We eventually ended up across from the castle and the bay and little did I know but in those pictures were our seats for the next week.  We didn't have glamorous seats but they sure did have a view, as you will see later, and that hillside covered in trees in the top left picture would be where we would find ourselves just a few days later.
Fast forward one week and on an extremely early morning Christeen and I found ourselves stepping off the train in Monaco for the practice rounds.  The night before and weeks leading up to this day I had studies the maps and read reviews after reviews and had a pretty good idea where our seats were and what to expect.  We were sitting in the Sector Rocher and it was basically a free for all on a hillside.

Knowing this we got up as early as possible to catch the first train to Monaco and truly had no idea what the day had in store for us.  After following the signs we got to our gate and got our tickets swiped and program bought.  From there you could literally sit anywhere in the area.  So we wandered around and found ourselves fairly close to the top of the hillside just off the road and a grassy area.

Soon after we got settled we realized we were in the midst of a group that had been coming to the grand prix and sitting in the same areas for years.  They were from all over Europe and had a common bond of Formula 1.  The ring leader of the group was Billy and he would entertain us for the next two days while we waited for the main event.  They welcomed us into their group and when they found out we were from Texas they loved us!  That group is part of the reason that we had such a memorable experience.  They made us laugh, looked out for us, and helped us embrace the 'Bucket List' weekend that much more.

Even though we were on a hillside we had the best seats in the house for many reasons.  We were under a shade tree, could see the track in seven different places, looked right down pit lane, and the walking bridge that all the drivers walked across was directly in front of us.  During our two days each time a driver would walk across Billy would get his mega phone and yell their names and inevitably they would stop and give us a wave.  Honestly, it was a bit unreal.  We saw legends, we saw rookies, and even a few celebrities. 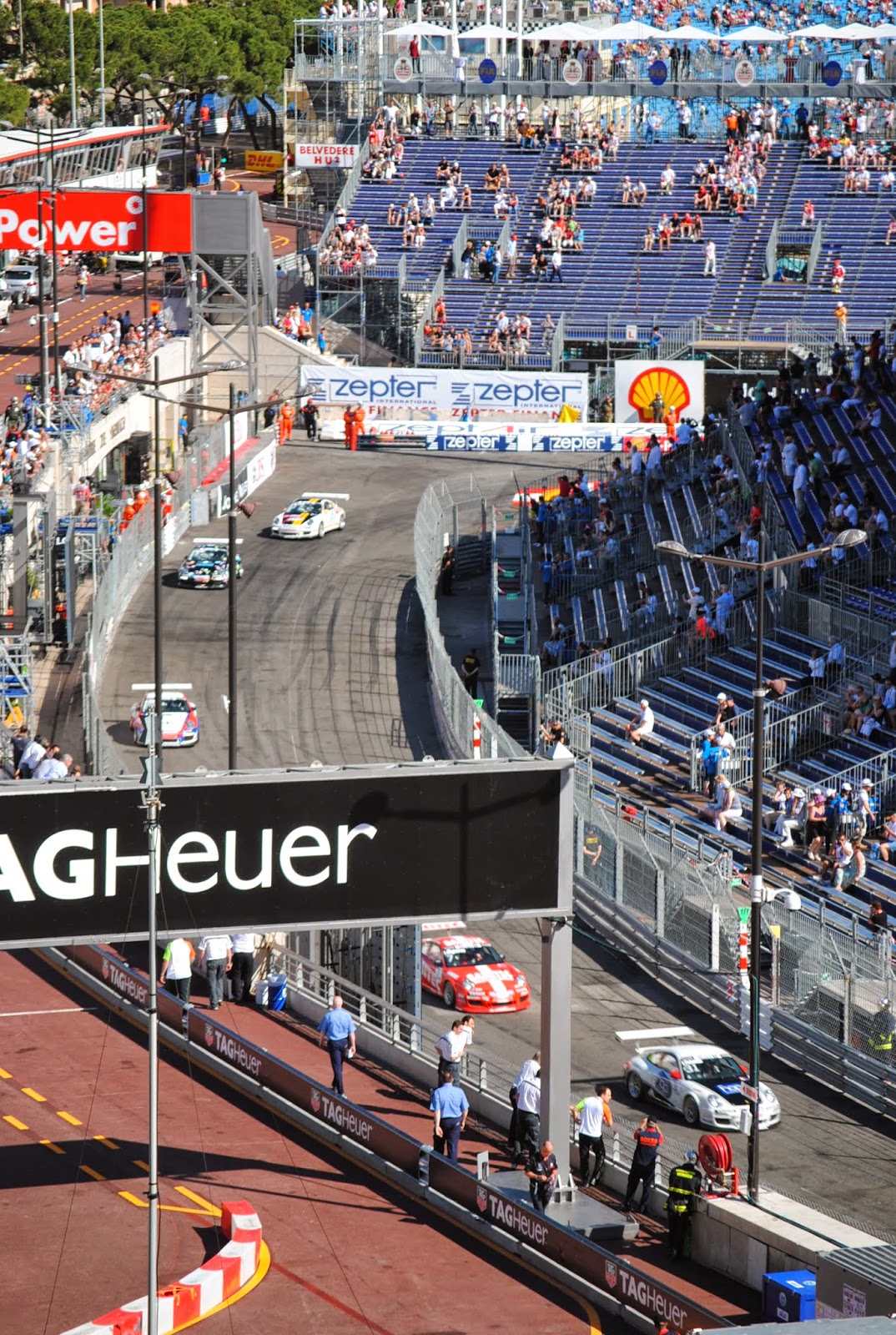 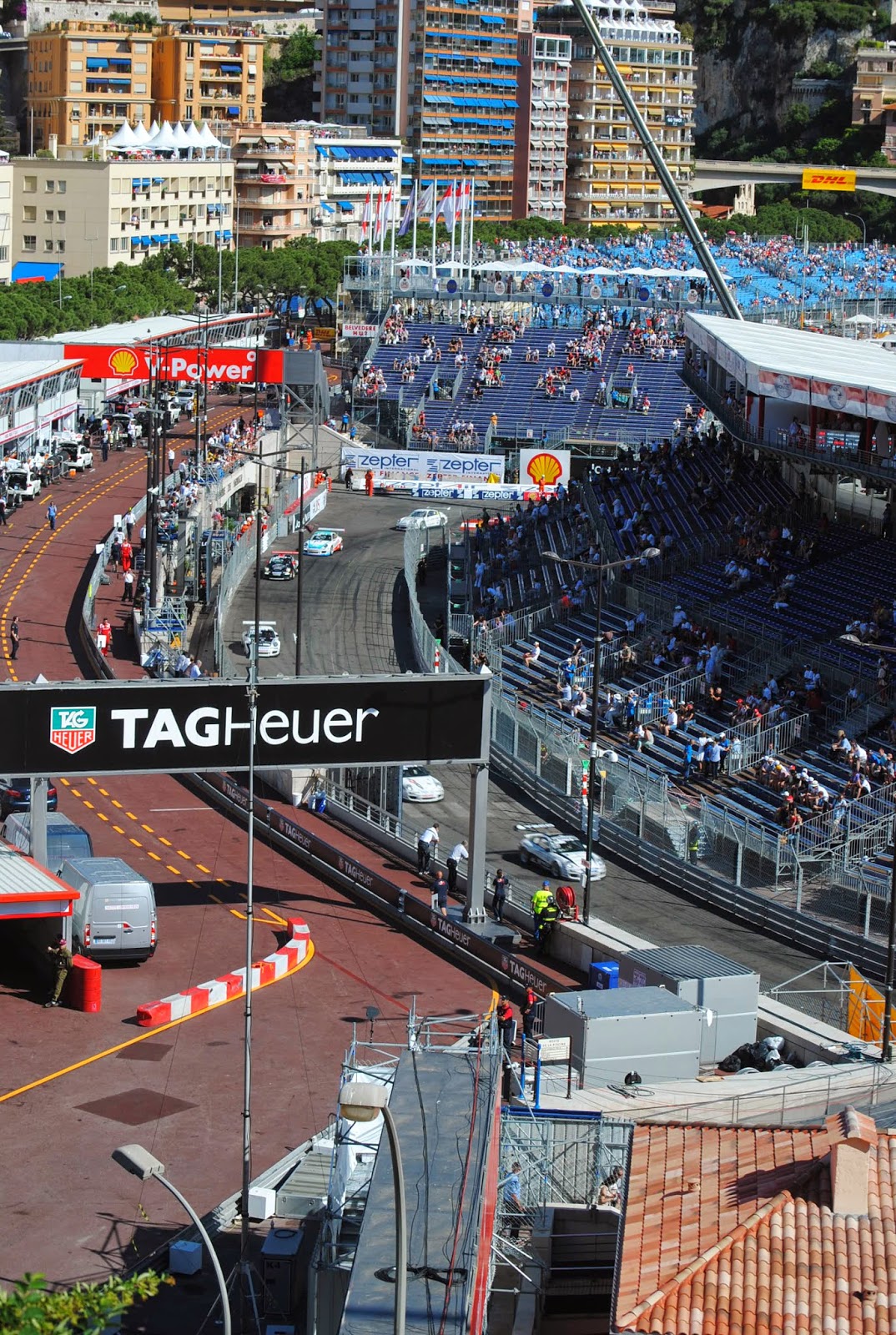 The day of the race we showed up around the same time and greeted our new friends.  We got settled and excited because the big day had finally arrived.  The two pictures above are from the Formula Renault 3.5 race which happened before all the Formula 1 festivities. 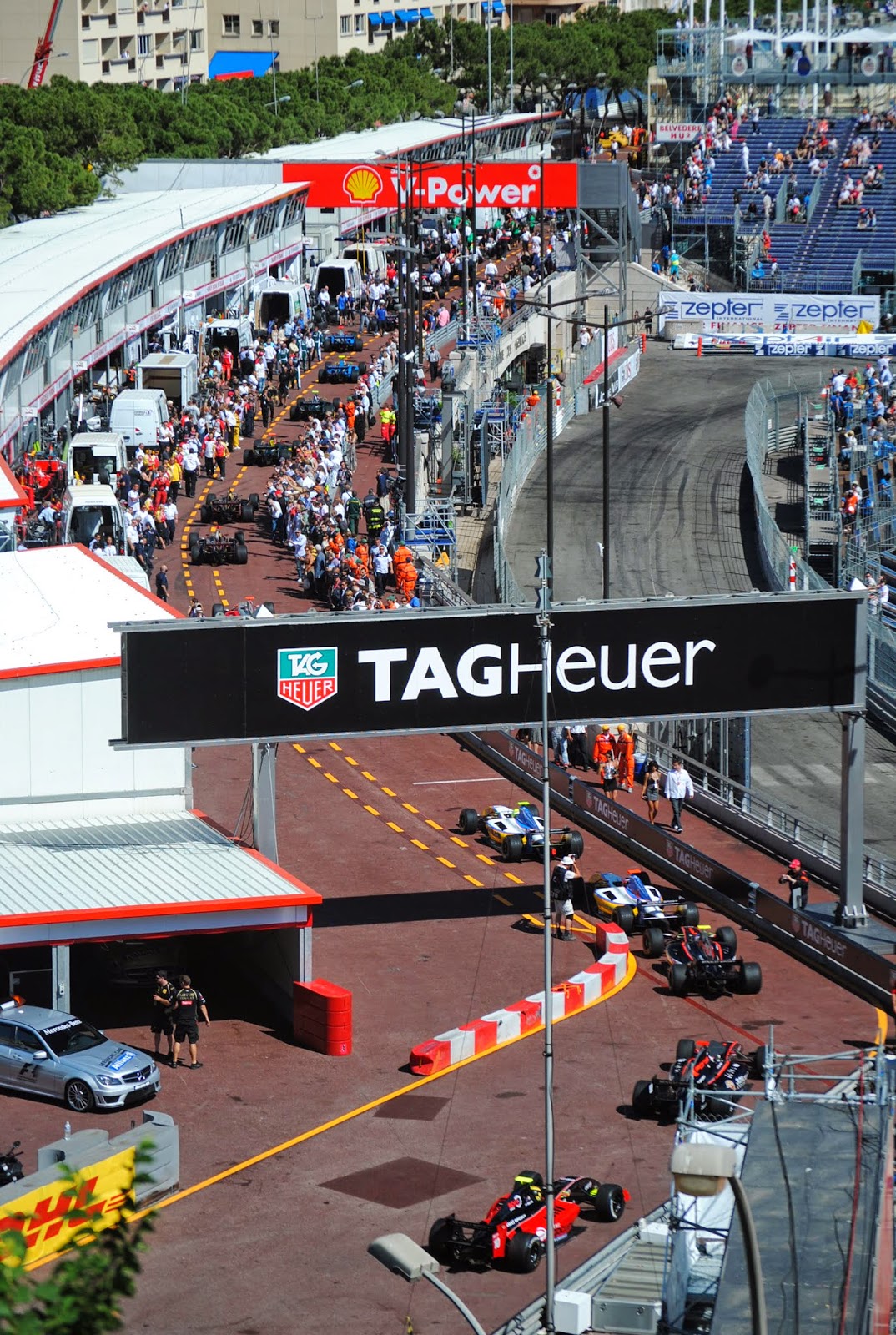 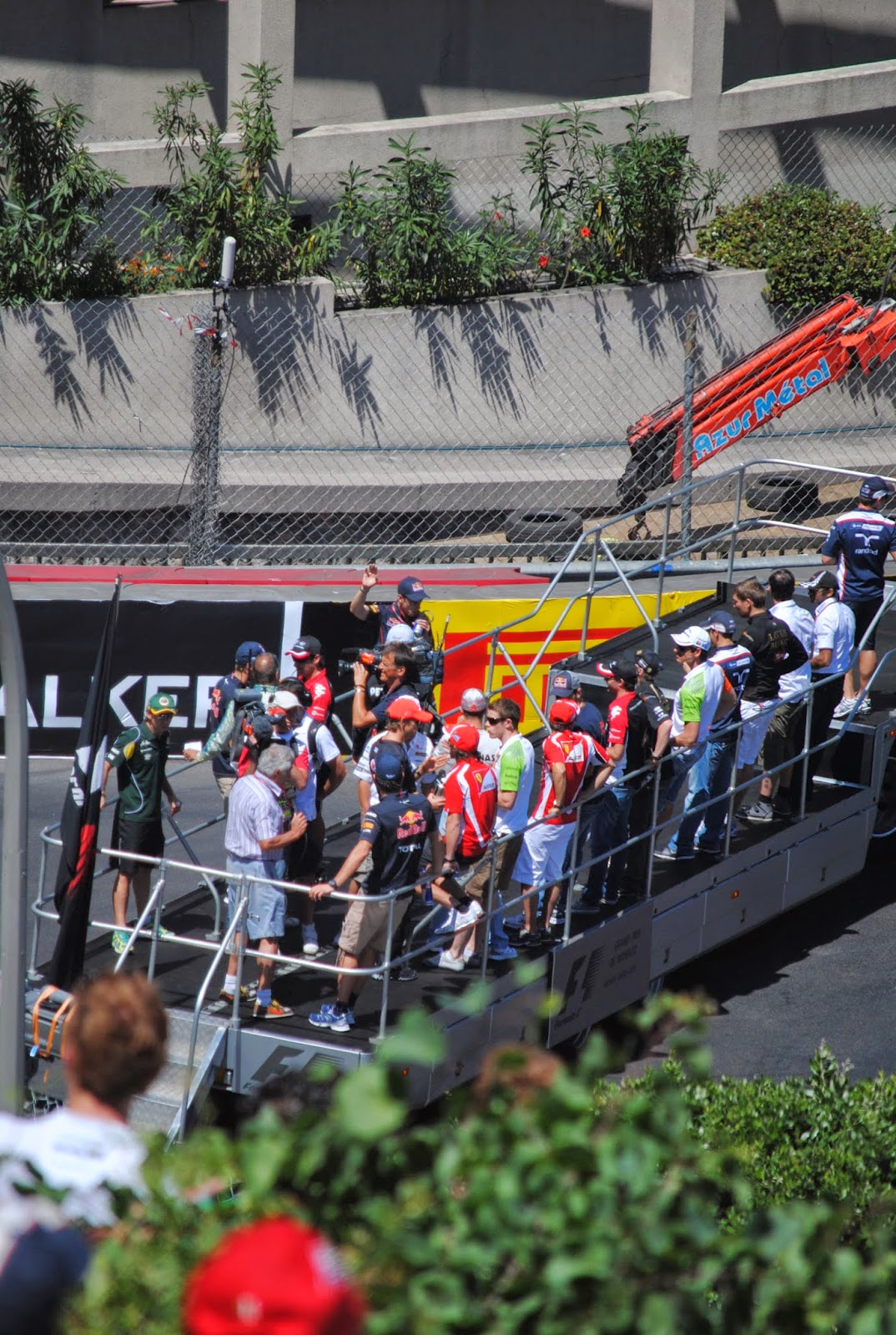 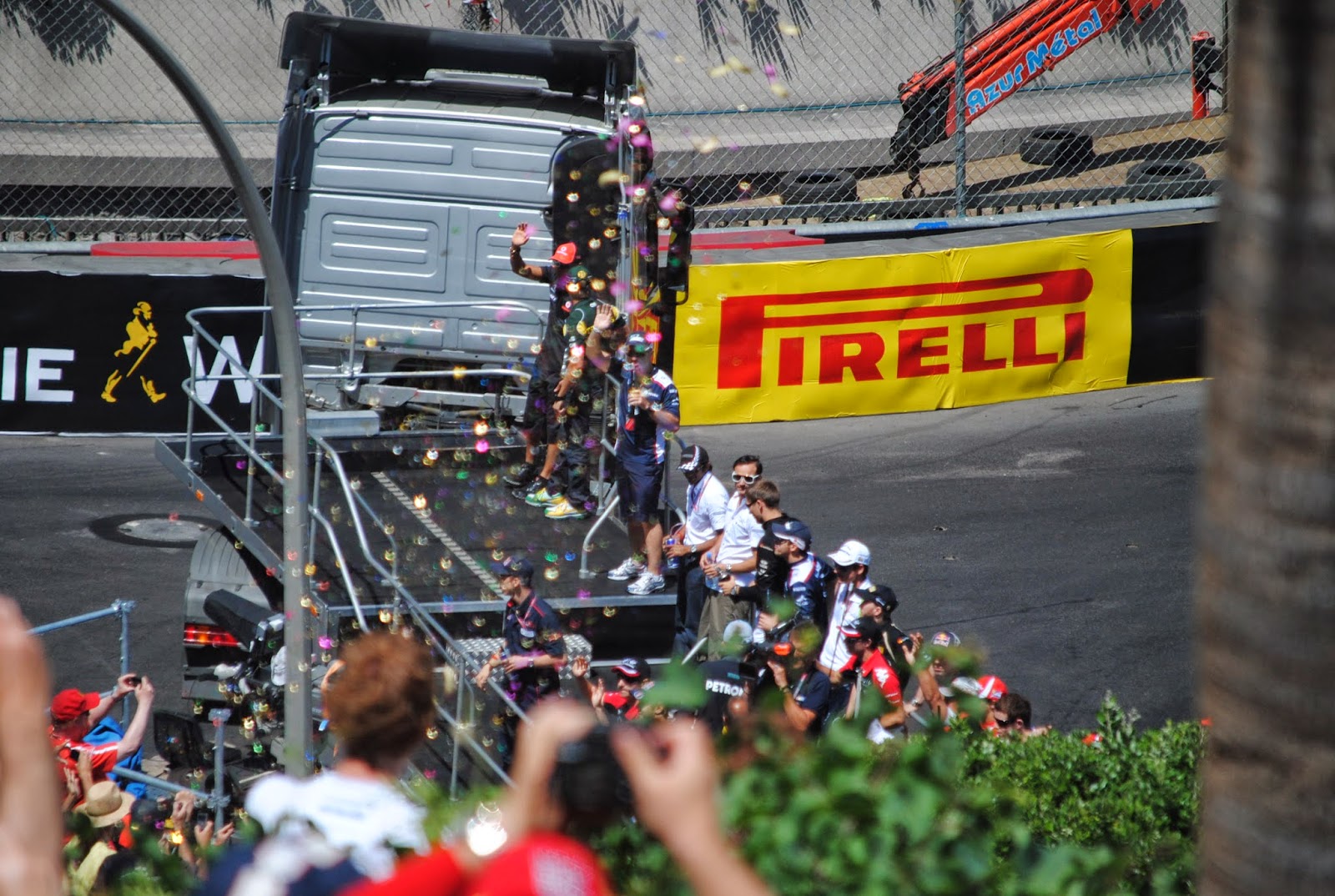 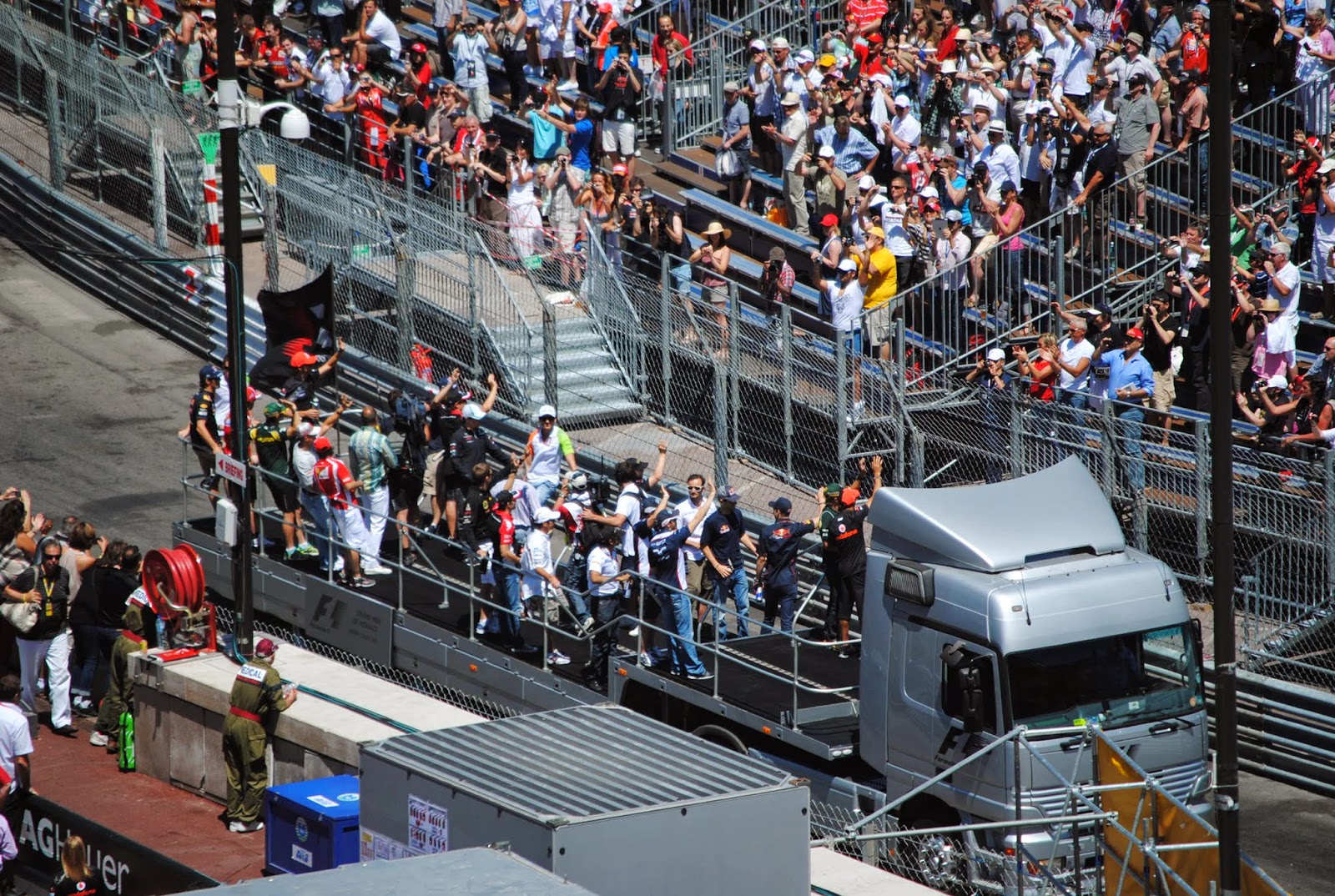 A little after noon the Drivers Parade happened and it was so cool to see all the drivers at once.  Many of them were interviewed as they rode around and we got to watch the interviews on the big screens. 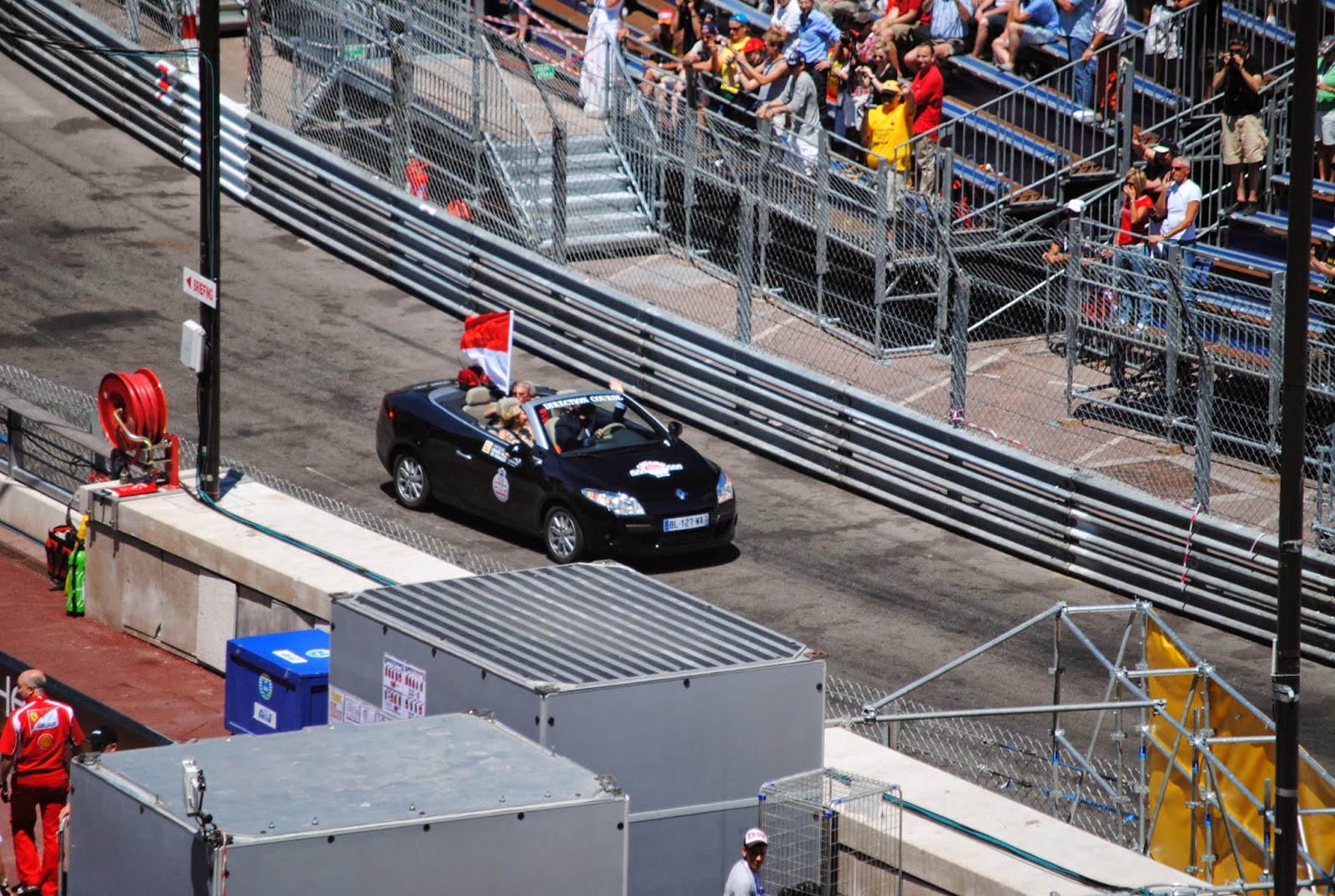 After the parade the Principality of Monaco made a lap around and next thing we knew the 2011 Monaco Grand Prix was underway. 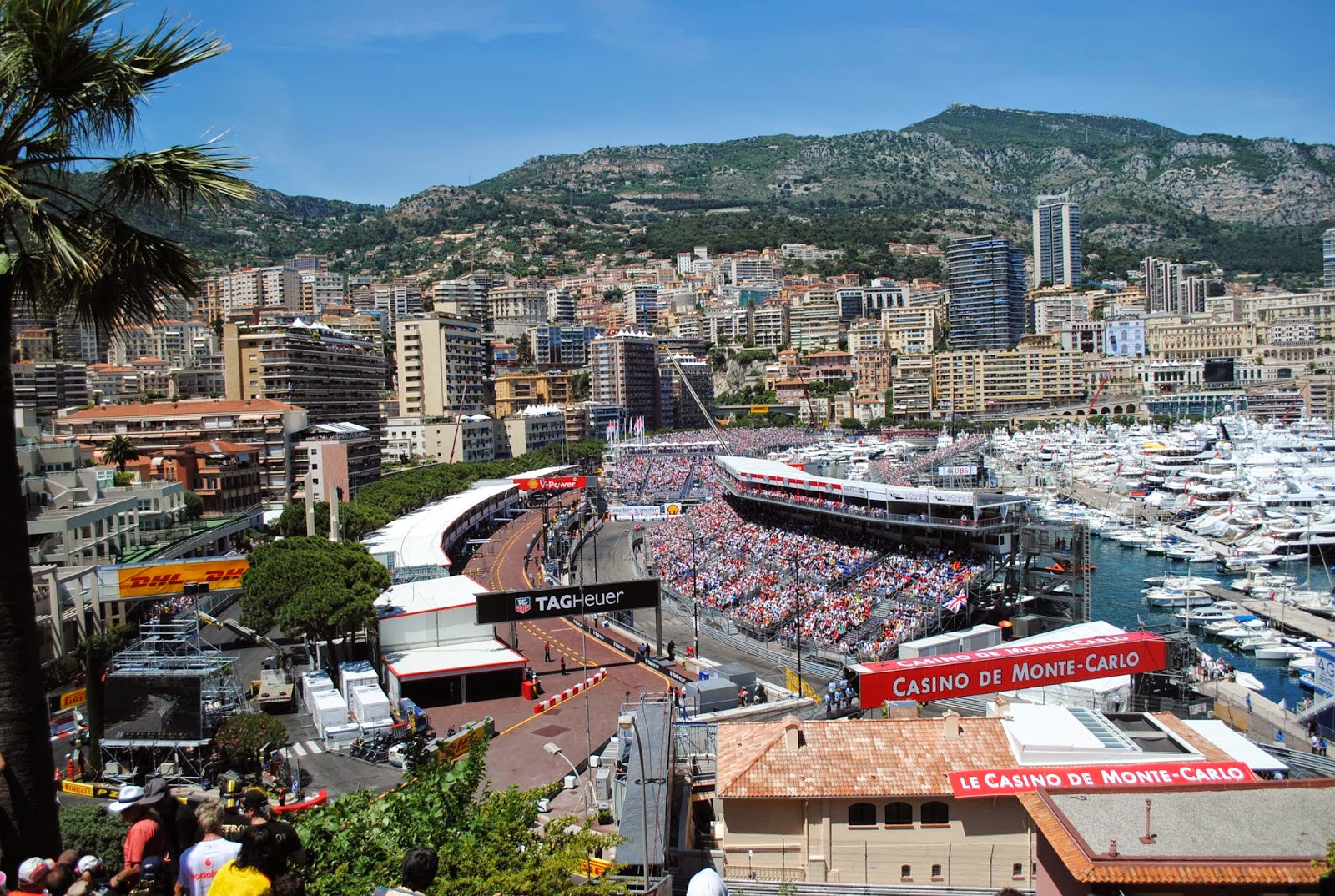 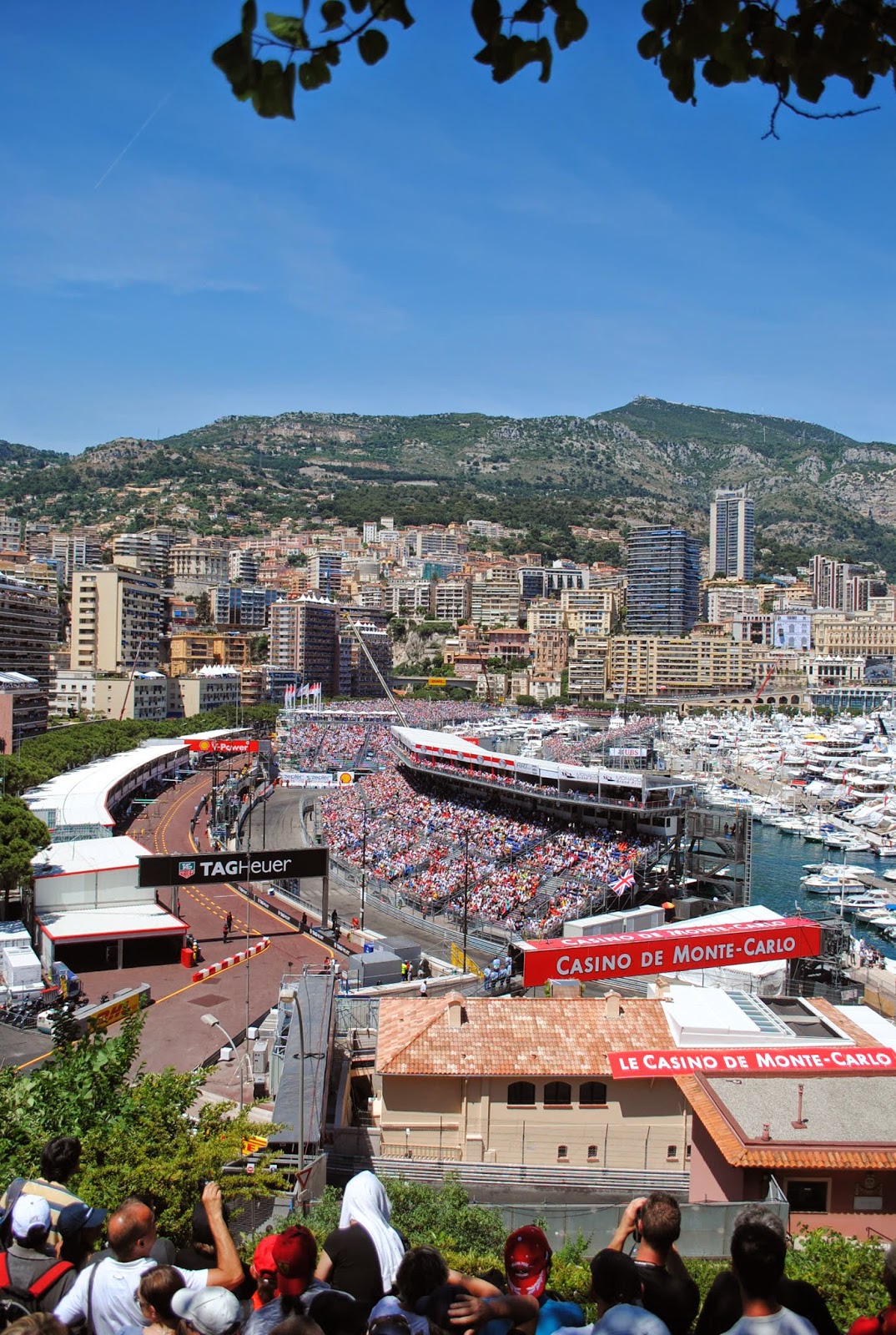 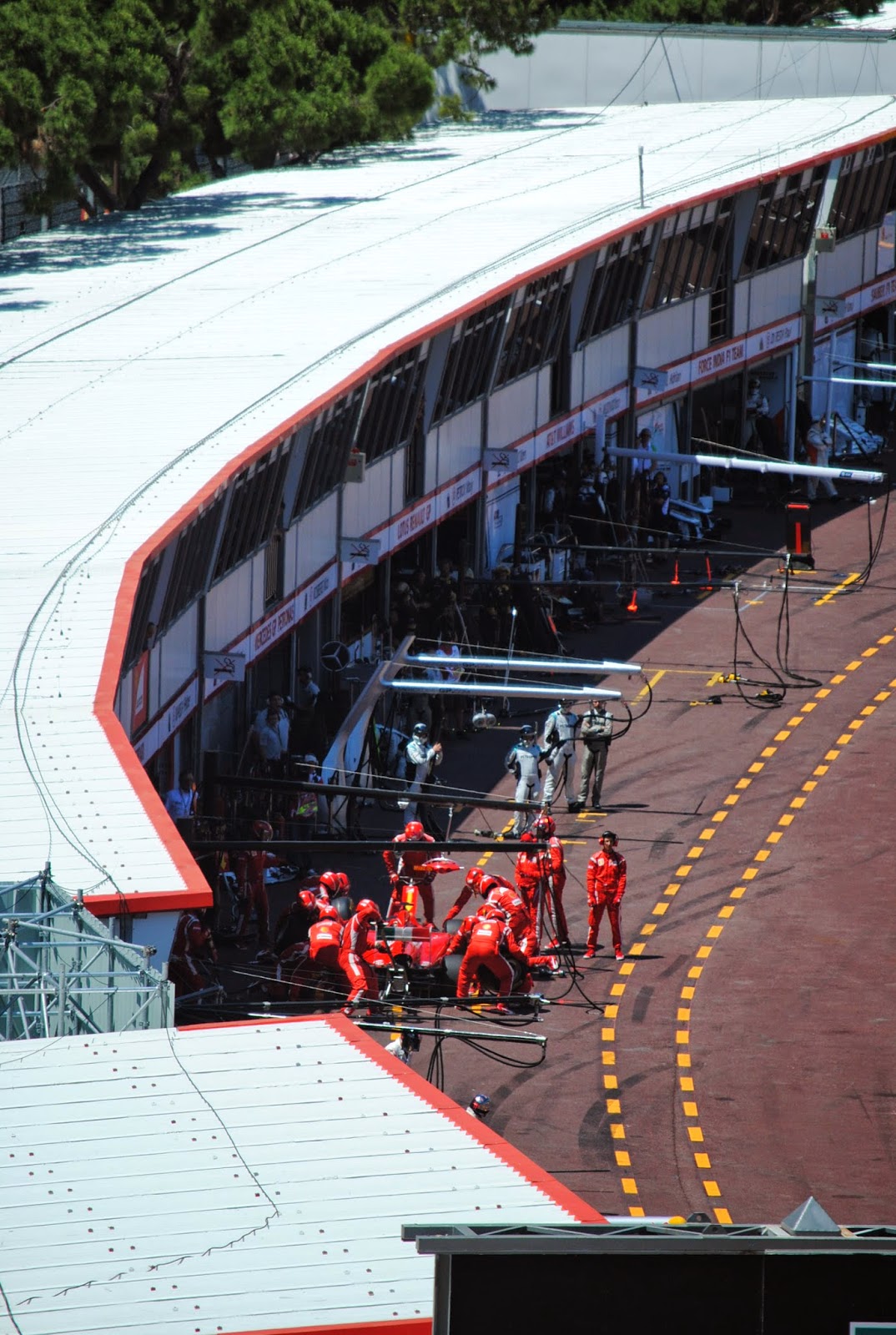 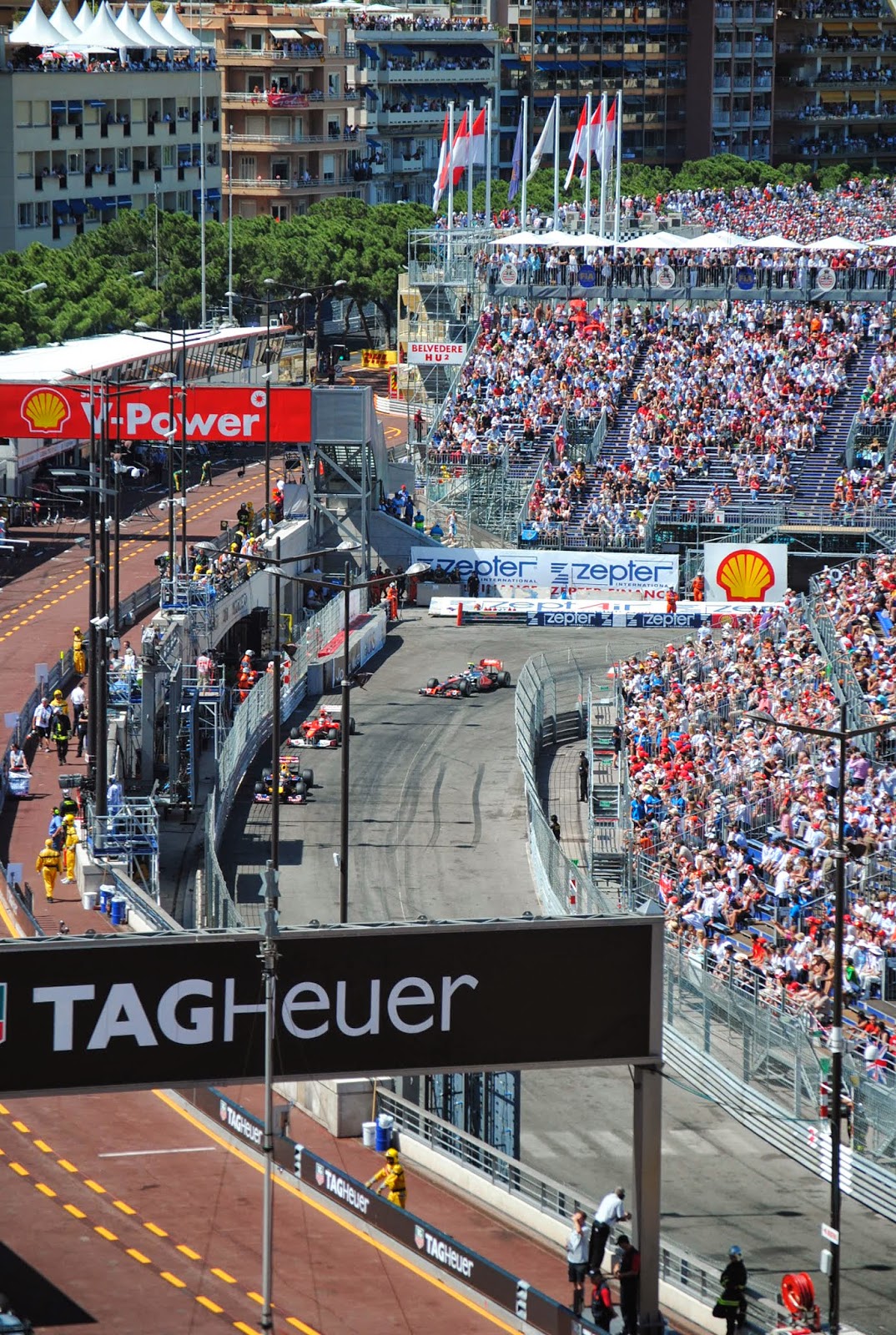 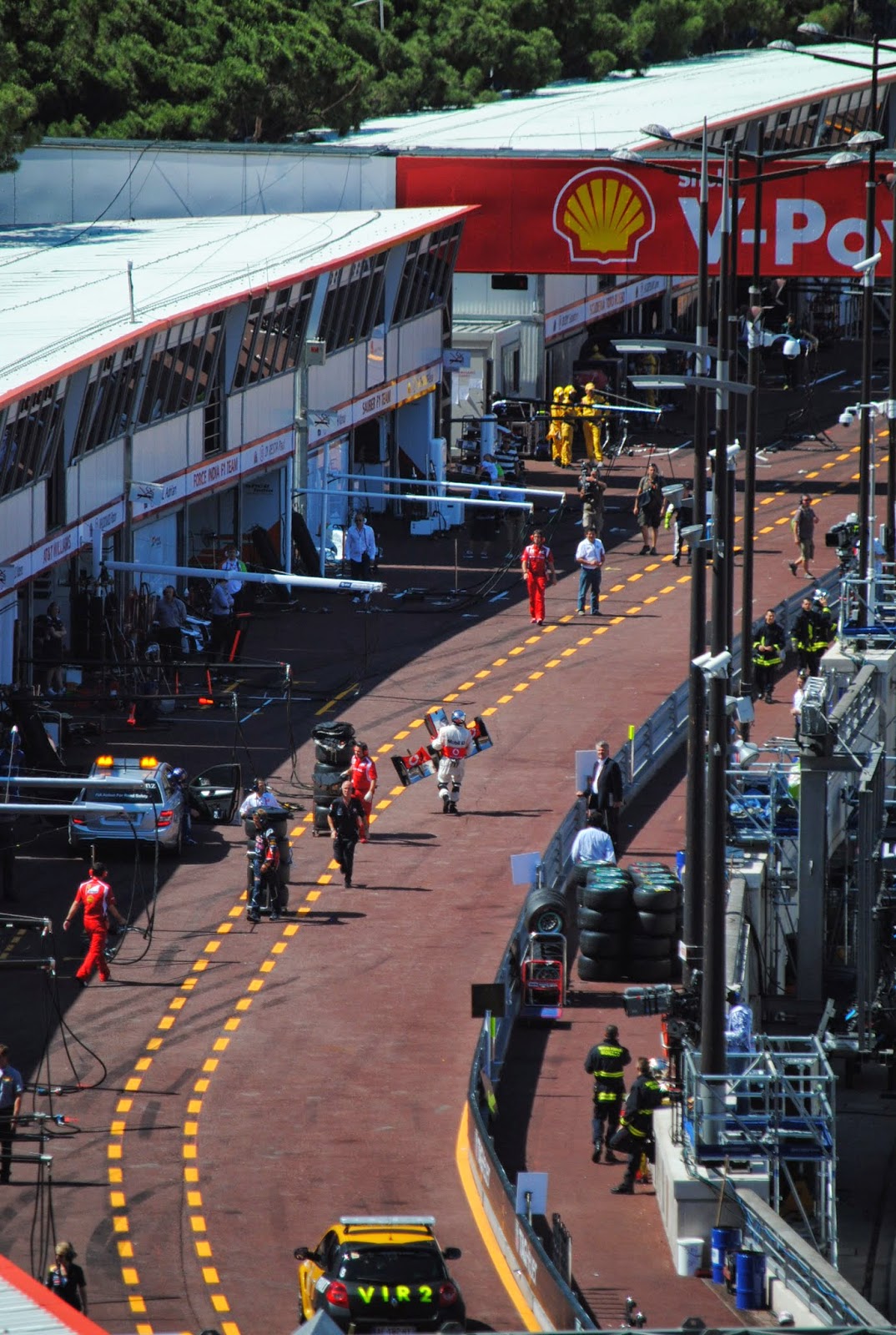 As you can see, we had unbelievable "seats" and they view was spectacular.  We could see the track from many different views and watching down pit lane was probably my favorite.  Towards the end of the race they had to stop because of an accident.  During the stop all the mechanics raced toward the starting line to work on the cars.  My favorite thing from that break was the single mechanic that you see in the photo above on the right running as fast as he could carrying a front wing.  Maybe it's just me, but that is funny. 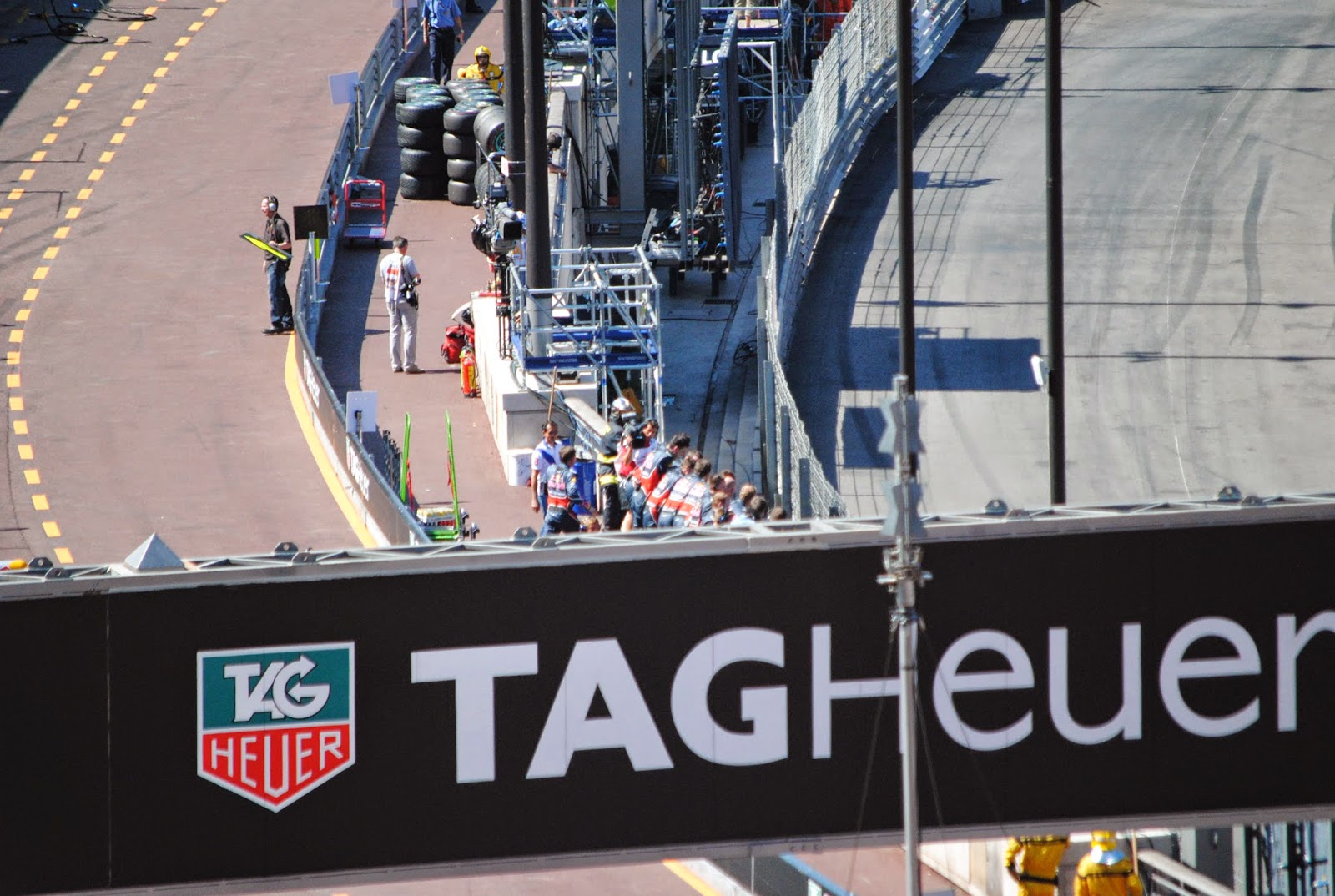 On the last lap Sebastian Vettel was the clear winner so his pit crew raced across pit lane to wave at him(above picture) as he approached his last few turns. 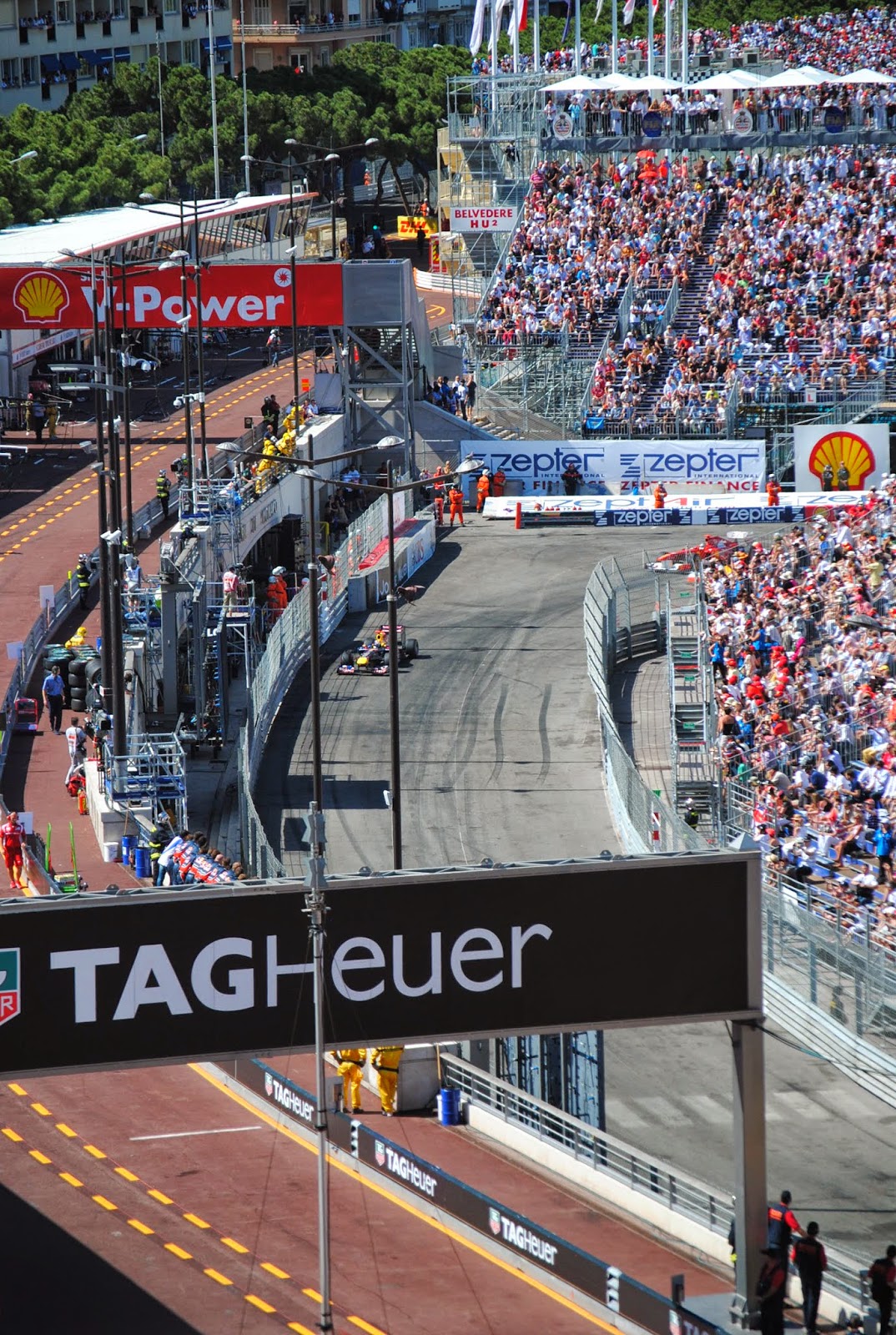 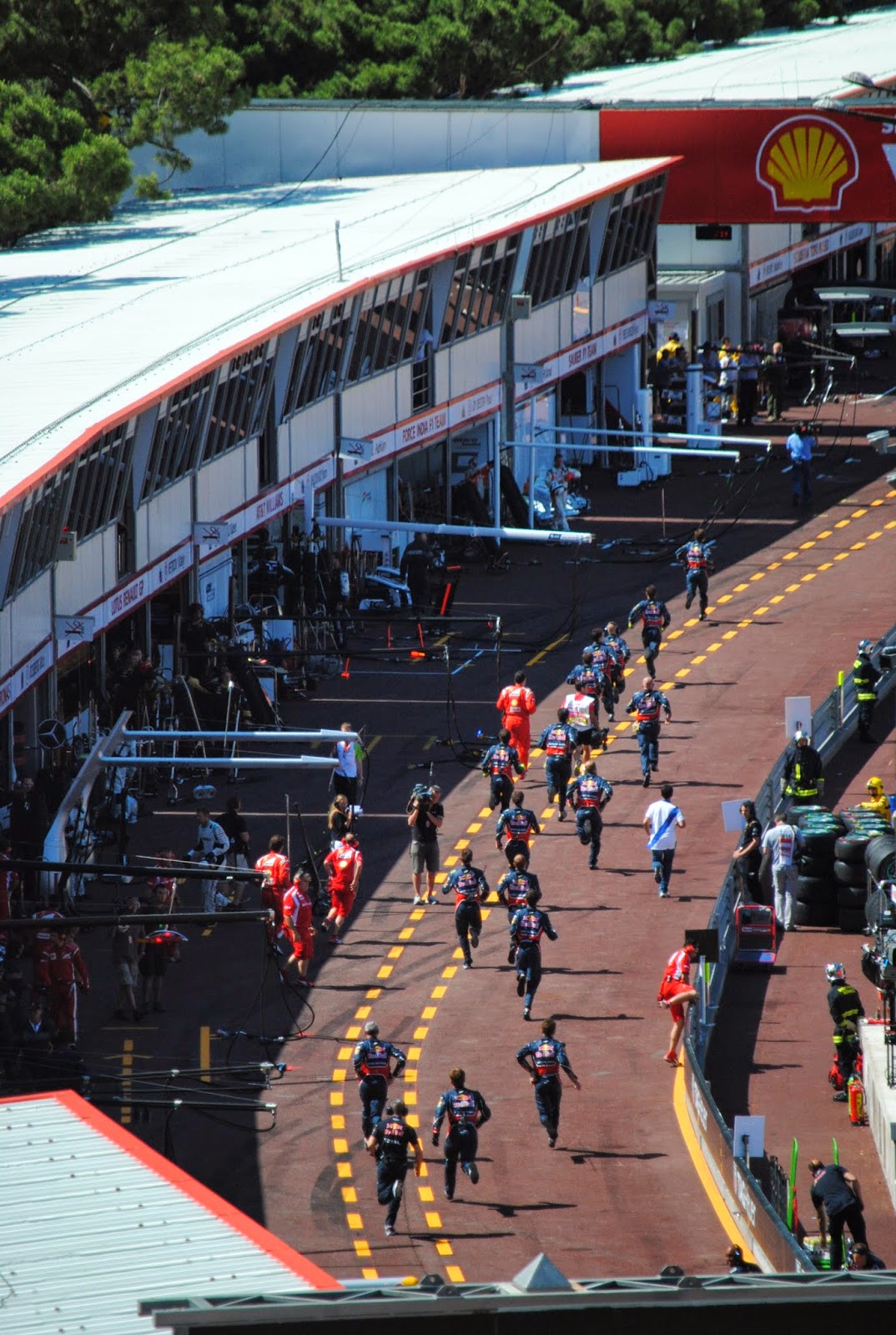 The presentation ceremony was a lot of fun to watch and the music was blaring through out the hole thing which made it even better.  We thought the cars were loud, then the music started and we reconsidered our previous thoughts. 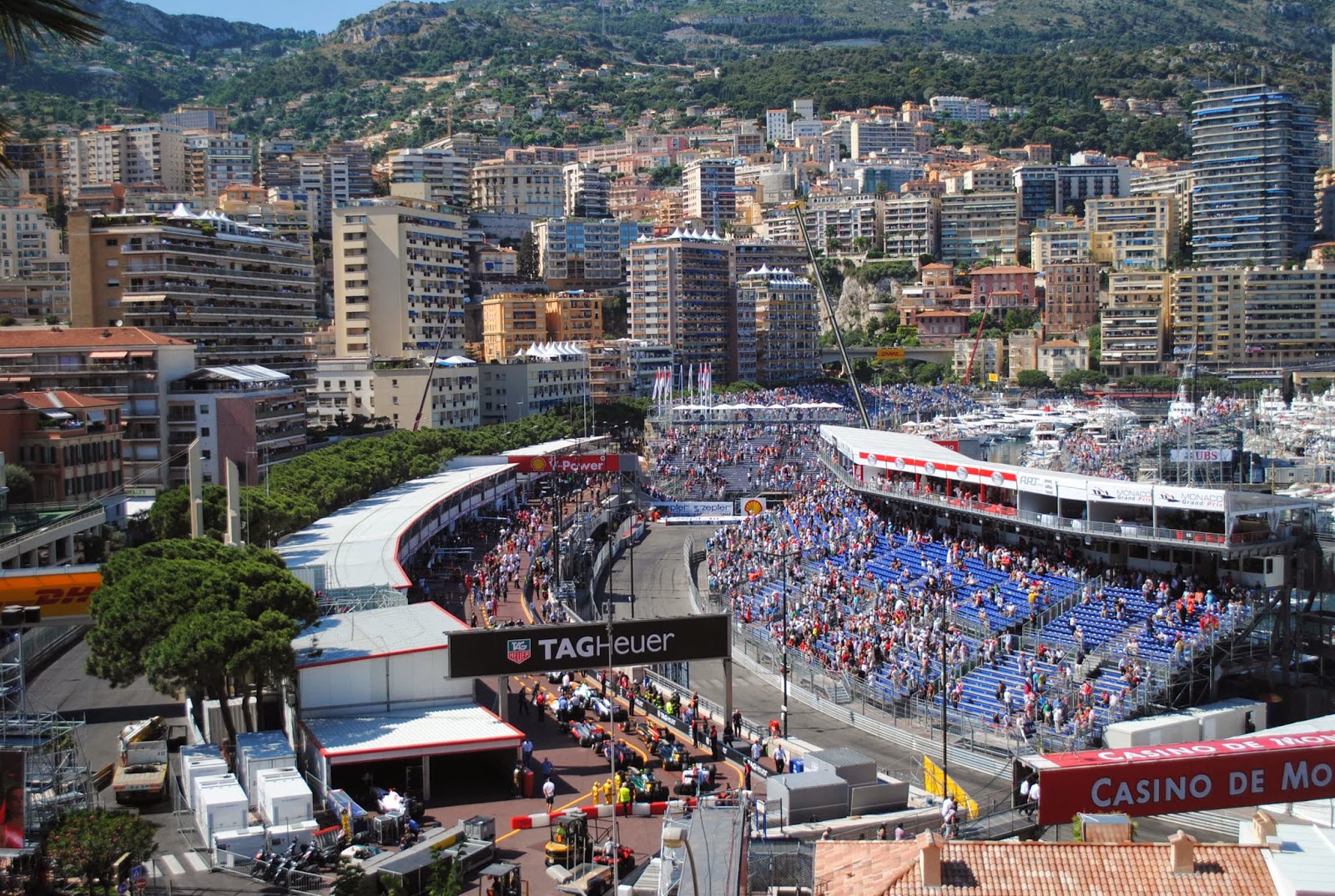 That amazing weekend was and will forever be one of the most amazing weekends of my life.  Yes I got to see an amazing race with Vettel making history and seeing other history makers like Michael Schumacher, Fernando Alonso, and  Jenson Button, but the true experience was the excitement of the crowd.  The excitement and joy when a Ferrari would pass someone and gain on the leader.  The excitement when a driver would take just a few seconds to stop and wave at us.  And most importantly the excitement of the racing history in that small country.
Labels: Formula 1 Monaco Remembering Travel

Cranberry Morning said…
Hi Lauren, that sounds like a fantastic time. A trip like that can stay forever in your mind! I'm stopping in from Stephanie's blog and am now following along via GFC and Feedly.
May 24, 2014 at 8:16 AM